This is for your safety. Earthquake strikes frequently in Lombok & Bali. Getting to Know the Triangle of Life Method, Just in Case. 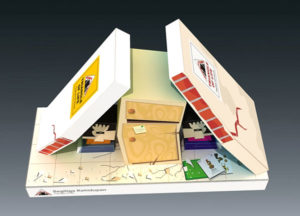 When you live or take a vacation in a country built across a ring of volcanoes, brace yourself and always prepare to experience some earthquakes during your stay since they can be unpredictable sometimes.

Contrary to the primitive assumption of natural disasters happening as a punishment for some governmental errors, the latest technology and scientific research have actually presented us with the fact that this lovely planet we call home will always stick to its habit of shifting the lands on its surface, causing a phenomenon we know as an earthquake.

With the tragedy striking our neighbouring island Lombok earlier this month, it’s never wrong to equip ourselves with the latest news and methods to safe ourselves during a quake, especially since we do get some impacts from the occurrence.

The method “duck, cover, and hold on” may have been our number one response since it’s so simple and easy to remember.

However, do you know that there is also another method called the Triangle of Life?

Popularized by a Mr. Doug Copp, the Rescue Chief and Disaster Manager of a private American rescue team, this method argues the previous self-rescue method of duck, cover and hold on, saying that it’s in fact dangerous to cover ourselves under a solid item like a wooden desk or bed during an earthquake, especially if we’re staying inside a massive building. Instead, the Triangle of Life urges us to position ourselves within the triangular area formed by two objects. The image provided may guide you better.

When parts of the building fell down making a triangular-shaped formation as shown above, it provides the safest place for us to wait until it’s safe to go outside and find authorities, this method theorizes.

However, the American Red Cross has pointed out that this method was formulated after an observation of building damages during an earthquake in Turkey; therefore not the best method to be practiced in the US or anywhere else outside Turkey since the two countries have a pretty different building codes in regard of the structures and construction standards.

It’s never wrong to know alternatives of self-rescue methods, but be aware that these methods have their own risks.

For the best chance of saving yourself (and your loved ones), make sure to get to know to the land you’re staying at, and ask the local authorities about the standard method that works best in the area. Be safe, and have a splendid time in Bali!

Stomach Flu & Other Common Illnesses You Can Catch on Holiday

Omicron Variant Increases Infections, Should I be worried?

Medical Evacuation, the history and its Urgency